Senior Master Sgt. Mark Schneider, a pavement, maintenance and construction equipment superintendent for the 200th RED HORSE, was named Senior Noncommissioned Officer of the Year for the Air National Guard earlier this year.

He is the first 200th RED HORSE (Rapid Engineer Deployable Heavy Operations Repair Squadron Engineers) member to win the national-level competition. Schneider credits the mentorship he has received from leaders throughout his career for helping prepare him for this honor. 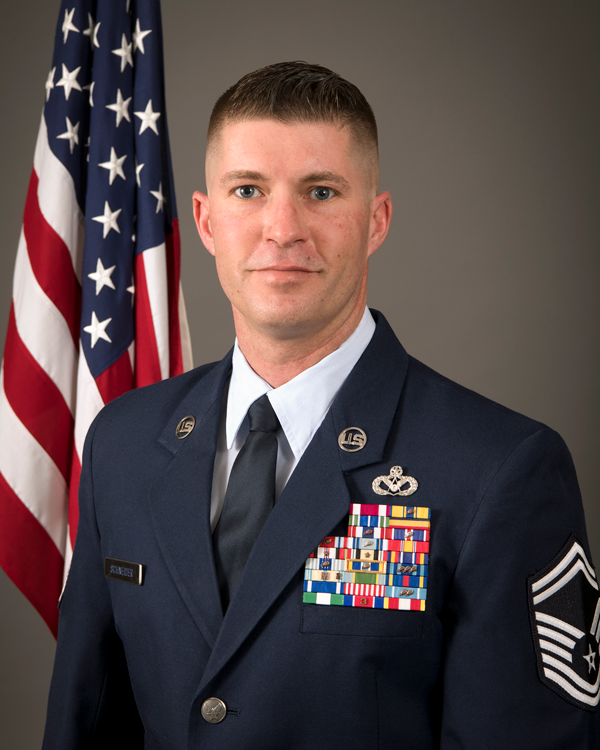 “I had a lot of good influences over the years,” Schneider said. “They’ve tailored me and took me under their wing to prepare RED HORSE for the future, and I’m looking to do the same thing for my fellow Airmen.”

“I had a lot of good influences over the years,” Schneider said. “They’ve tailored me and took me under their wing to prepare RED HORSE for the future, and I’m looking to do the same thing for my fellow Airmen.”

Schneider said he is thankful to represent his unit with such a prestigious national-level honor because it sheds light on the RED HORSE mission. Schneider describes the unit as versatile and self-sufficient with the ability to “build big things in a short amount of time.” He said that most people think of them as a construction crew, but pointed out the unit also has key support elements, including mechanics, food service, mortuary affairs and medical personnel.

Schneider said his mindset can be analytical and process-driven at times, but his greatest strength is caring about and for his troops. He said his mentorship style allows him to evaluate and recognize the unique qualities in each Airman, mentor their talents and help mold them in a direction that will not only benefit them in their military and civilian careers, but also throughout their lives.

Schneider said he encourages all Airmen to find a wingman.

“The missions are going to get more and more difficult as we progress,” he said. “There’s going to be increasingly more demand, but we always have our friends, our friendships and fellow service members that we need to lean (on) and ultimately mentor them to be tomorrow’s leaders.”

The COVID-19 pandemic posed unique challenges when it came to acquiring supplies, anticipating logistics chain delays and meeting social distancing and spacing guidelines during deployment with his troops. Schneider praised his Airmen for assisting him in adapting and overcoming those struggles.

“I don’t think we would have been as successful with our last deployment and throughout the years that I’ve been with them if that communication wasn’t there. They are able to be open with me, identify what our weaknesses are, so that we can work together, work through the problems as a team,” Schneider said.

Schneider is approaching 20 years of military service and although he has seen a lot of changes in that time, he said one thing has remained the same.

“RED HORSE is a family to me and we need to have the mentality of next man up. We’re all going to retire one day, but as long as we have someone that we can trust and lean on to replace us, the organization can keep going in a positive direction.”