SOUTH BASE, Serbia (06/03/19) — About 500 Soldiers representing 10 countries assembled June 3, 2019, at South Base, Serbia for the Platinum Wolf 19 opening ceremony. The two-week multinational training exercise is taking place June 3-18, 2019, at South Base and the Borovac Training Area. ~READ STORY 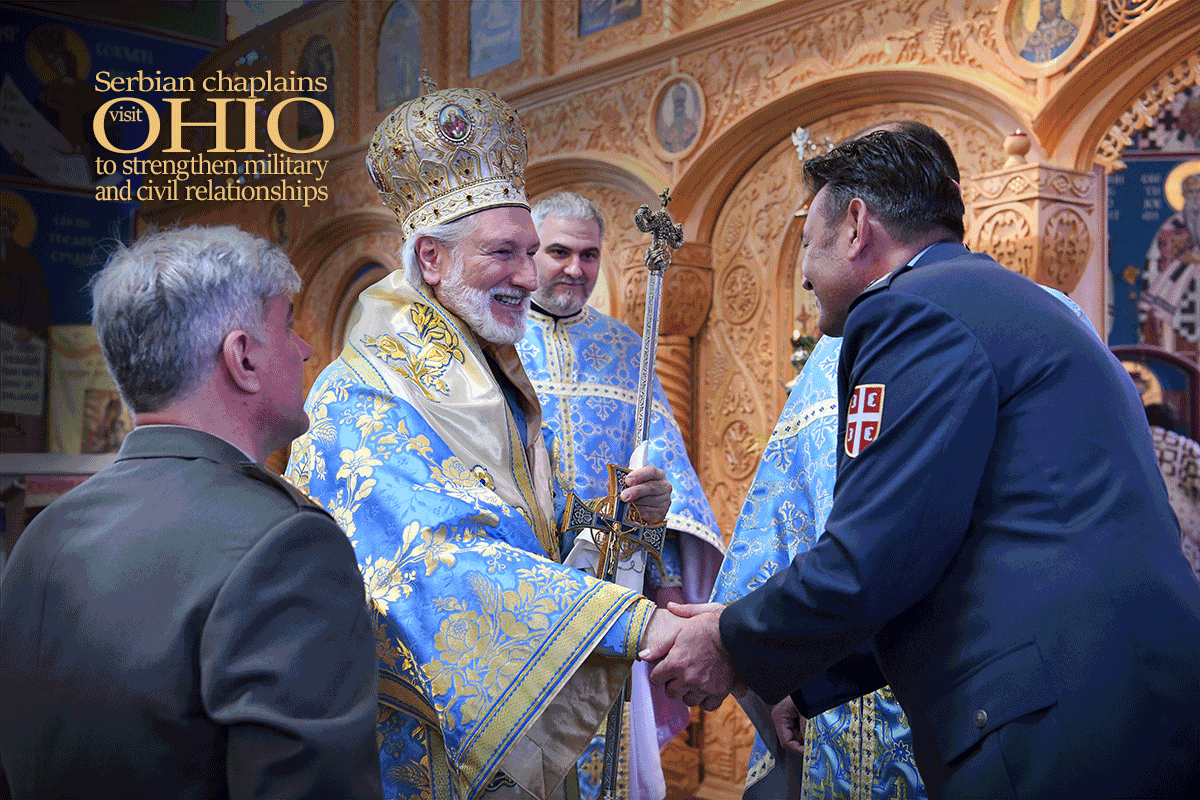 CLEVELAND (04/12/19) — Four members of the Serbian Armed Forces chaplain corps visited in April 2019 as part of the 13-year State Partnership Program pairing between the Ohio National Guard and Serbia. The chaplains visited the St. Sava Serbian Eastern Orthodox Church and Notre Dame College in Cleveland to interact with the ethnic Serbian community and strengthen military and civilian relationships between Serbia and Ohio. ~READ STORY 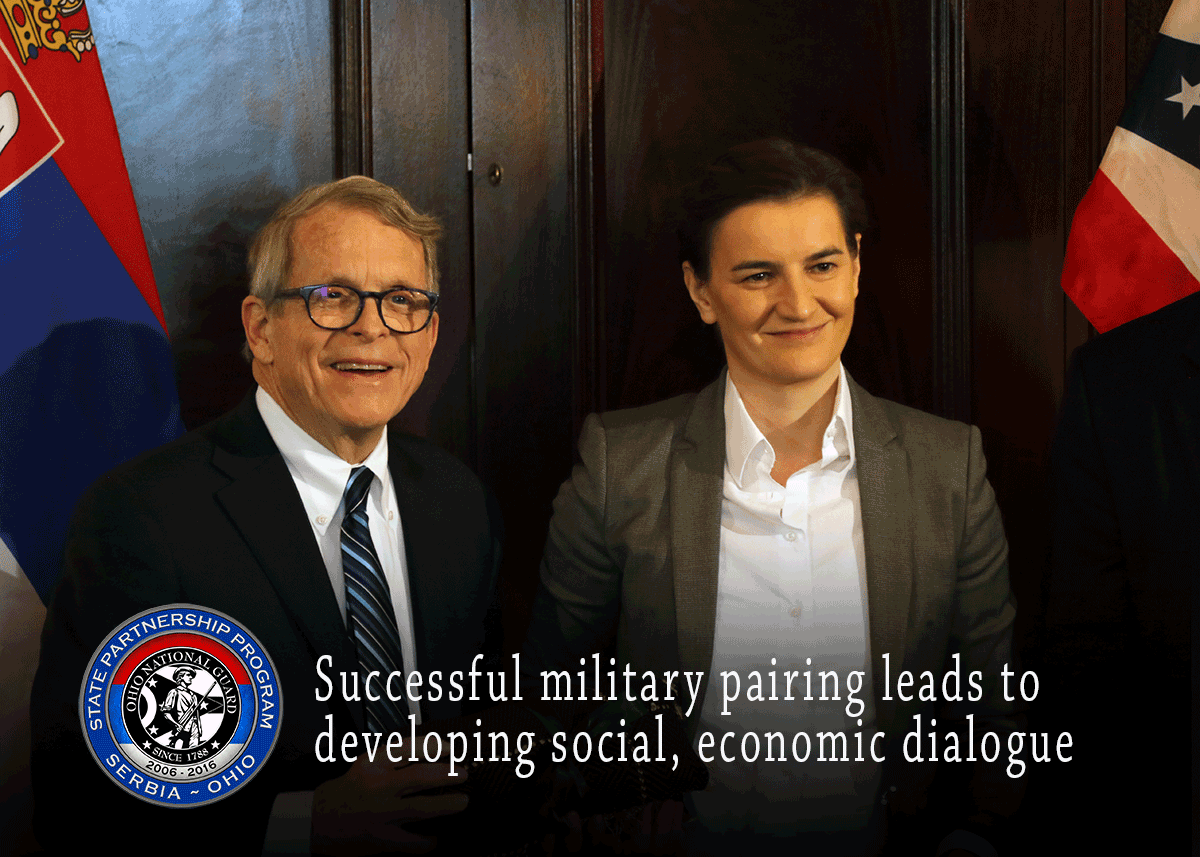 Prime Minister of the Republic of Serbia visits Ohio

BELGRADE, Serbia (09/10/18) — The Department of Defense’s State Partnership Program asks that each state and their partner nation has the ability to conduct a variety of joint exercises and training events to enhance interoperability and cooperation between partner and allied nations while building relationships. The Ohio National Guard and Serbian Armed Forces have shown commitment and dedication to that strategic initiative for 12 years and counting. ~ READ STORY

UJDOROGD, Hungary (09/20/18) — As the squads slowly moved forward into the village, the vicious chatter of machine gun fire erupted as they engaged enemy forces. Building by building, the teams painstakingly cleared each room; hand motions and short sharp commands are all the communication required. The enemy was routed, but not without injuries to the victors. Hobbling out, supported by two teammates, one soldier was assisted onto a helicopter, waiting to get the wounded to medical help. ~ READ STORY

VRANJE, Serbia (06/17/18) — It was an experience of a lifetime for the Rev. James Sizemore, an Ohio Army National Guard chaplain and lieutenant colonel, to participate in a Serbian Orthodox Divine Liturgy June 17 at Holy Trinity Cathedral in Vranje. ~ READ STORY

Military service is a tradition in her Family, so it was no surprise when Ohio Army National Guard Spc. Cheyanna Porter enlisted in the spring of 2015 and completed basic training during the summer between her junior and senior year of high school. ~ READ STORY

BOROVAC TRAINING AREA/SOUTH BASE, Serbia — Platinum Wolf 18 is a two-week multinational peacekeeping exercise that has brought more than 500 soldiers from 10 nations together to enhance military cooperation and interoperability, June 11-22. ~ READ STORY

Soldiers from the Ohio National Guard's 838th Military Police Company compete with soldiers from nine other nations during a marksmanship competition at Platinum Wolf 2018. Platinum Wolf 18 is a two-week multinational peacekeeping exercise that has brought more than 500 soldiers from 10 nations together to enhance military cooperation and interoperability, June 11-22, 2018. ~ READ STORY

SOUTH BASE, Serbia (06.19.2018) — Exercise Platinum Wolf 2018 brought 10 nations and more than 500 soldiers from around the world to Serbia’s South Base and Borovac Training area to participate in a multinational peacekeeping exercise. As the nations came together for the two-week event, they each brought unique cultural and religious differences that could pose challenges to communication, cooperation and interoperability, but that was not the case for this year’s exercise. ~ READ STORY

SOUTH BASE, Serbia (06/22/18) — In uncertain times, with many challenges in the world, focusing on the strong bonds established with partner nations around the globe will not only increase strength in peacetime, but will also improve capabilities during times of conflict, when they arise. ~ READ STORY

BELGRADE, Serbia (09/03/18) — Around 40 Ohio National Guard members have arrived in the Republic of Serbia for CAPSTONE 2018, a product of the Department of Defense’s State Partnership Program that pairs states’ National Guards with nations around the world in mutually-beneficial relationships. ~ READ STORY

COLUMBUS, Ohio (09/05/18) — In a quickly globalizing world, interconnectedness has become easier and more fruitful. Over the last 12 years bonds between the Ohio National Guard and the Republic of Serbia have grown strong, a product of the Department of Defense’s State Partnership Program, which pairs states’ National Guards with nations around the world in mutually beneficial relationships. ~ READ STORY

LUANDA, Angola (12/08/17) — Airmen and Soldiers of the Ohio National Guard and Serbian Armed Forces arrived here Dec. 8 for PAMBALA 2017, a two-phase trilateral medical engagement, and the welcome, not to mention the weather, couldn’t be warmer. ~ READ STORY

BENGO PROVINCE, Angola (12/14/17) — During the PAMBALA 2017 exercise closing ceremony and VIP day, senior military leaders from Serbia and the United States exchanged flags with the host nation, the Republic of Angola, as a sign of the gratitude for the hospitality and friendships created with the Angolan Armed Forces over the two-week event. ~ . READ STORY

COLUMBUS, Ohio (06/28/17) — Representatives of the Serbian and Angolan Armed Forces met with members of the Ohio National Guard in late June to discuss plans for an upcoming Combined Medical Engagement set to take place in Angola later this year. More than 20 planners from all three countries gathered for a week to work through the details for the upcoming event.. ~ READ STORY

COLUMBUS, Ohio (09/14/17) — Members of the Ohio National Guard and Serbian Armed Forces joined together to carry out the second annual Cyber Tesla exercise Sept. 11-14 at two locations — in Ohio and Serbia. ~ READ STORY

Ohio works with SPP partners, other countries during PLATINUM WOLF 17

BELGRADE, Serbia (09/05/16) — Maj. Gen. Mark E. Bartman, Ohio adjutant general, made an official visit here in September to mark the 10th anniversary of the Ohio National Guard’s State Partnership Program pairing with the Serbian Armed Forces. Ohio’s partnership with the Republic of Serbia has included numerous military, socio-political and economic exchanges over the past decade, in the interests of promoting European regional stability and civil-military relationships. ~ READ STORY

BELGRADE, Serbia (09/22/15) — The bilateral affairs officer (BAO) is a three-year temporary Active Guard/Reserve position, which serves as a full-time liaison between the Ohio National Guard and the Republic of Serbia. The BAO position is a broadening assignment, offering a learning opportunity to see how government works, how the military interacts with the media, and how a U.S. Embassy functions. ~ READ STORY

(08/21/10) — Four pilots from the Serbian Armed Forces trained with the 1st Battalion, 137th Aviation Regiment during its annual training period and learned about the night vision capabilities of Ohio’s aviators. ~ READ STORY

KRALJEVO, Serbia (08/16/2012) — More than 30 Ohio National Guard members worked alongside their counterparts in the Serbian 2nd Army Brigade to repair the Svetozar Markovic Primary School in Kraljevo, Serbia, which was damaged by an earthquake in late 2010. ~ READ STORY

Serbia (09/25/12) — Maj. Gen. Deborah A. Ashenhurst, Ohio adjutant general, and a delegation from Ohio visited Serbia in September 2012. The visit included participation in a ribbon-cutting ceremony for a school gym renovation project that more than 30 Ohio National Guard engineers helped complete while working alongside their Serbian counterparts, as well as participation in the “Batajnica 2012” Air Show, highlighting 100 years of Serbian military aviation. ~ READ STORY 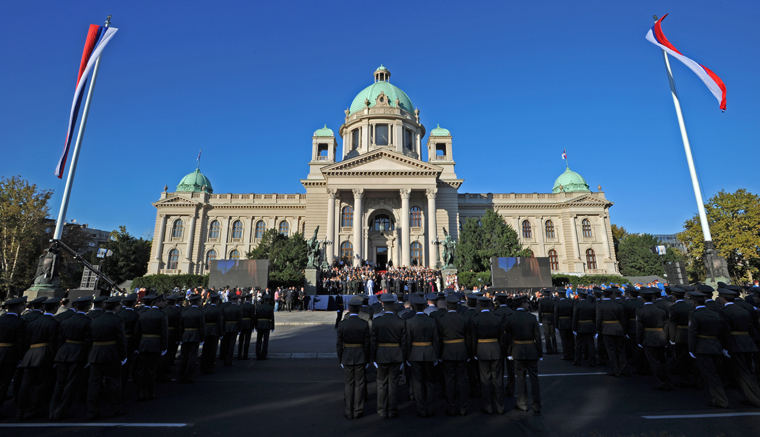