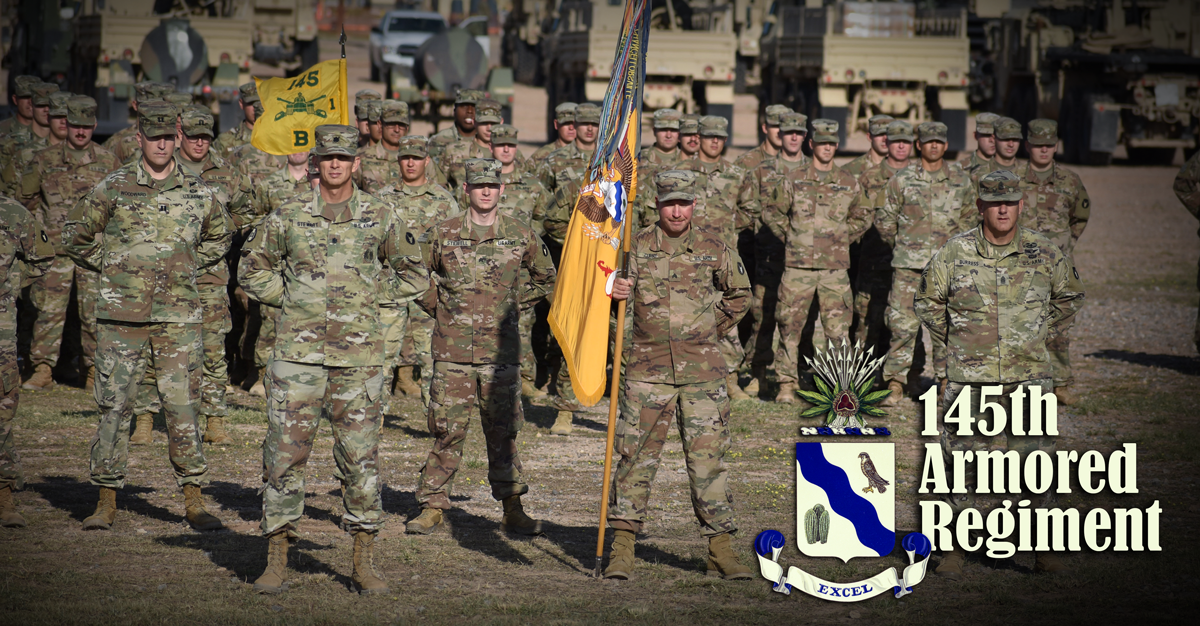 Lt. Col. Jonathan Stewart (front row, left) and Command Sgt. Maj. Michael Burress (front row, right) of the 1st Battalion, 145th Armored Regiment stand in formation for a unit photo with the organizational colors in October 2019 at Fort Bliss, Texas, prior to an overseas mobilization to support Operation Spartan Shield. The coat of arms, which was passed to the 145th Armored Regiment in 2007, can be seen on the organizational colors.

Institute of Heraldry’s drawing of the coat of arms for the 145th Armored Regiment.

SHIELD: Argent, a bend wavy Azure between a falcon close and a cactus Proper.
CREST: That for the regiments and separate battalions of the Ohio Army National Guard: From a wreath Argent and Azure, a sheaf of seventeen arrows Argent bound by a sprig of buckeye (aesculus glabra) fructed Proper (two leaves bursting burr).
MOTTO: EXCEL.

SHIELD: The service of the original organization, the 145th Infantry Regiment, is indicated by the white shield for infantry. The falcon from the arms of Montfaucon, France and the wavy bend for the Escaut (Scheldt) River symbolize the most outstanding feats of the regiment during World War I. The giant cactus represents service on the Mexican border.
CREST: The crest is that of the Ohio Army National Guard.

On JULY 17, 1928, nearly five years after first requesting approval, the Secretary of War approved the design and symbolism of the coat of arms for the 145th Infantry Regiment, the ancestor of today’s 145th Armored Regiment.

By regulation, each regiment and separate battalion in the U.S. Army is authorized a coat of arms. The coat of arms, which consists of the shield, crest and motto, appear on a unit’s organizational colors. On the colors, an eagle’s breast is embroidered with the shield of the coat of arms and a crest is above the eagle’s head. The eagle’s beak grasps a white scroll inscribed with the unit motto. All heraldic items reflect the unit’s history and, since 1960, are approved by The Institute of Heraldry.

Approval of Coat of Arms for U.S. Army units began shortly after the conclusion of World War I. The design and symbolism of each follow traditional heraldic principles that date back to the 12th century. Once approved, each coat of arms includes a blazon, or heraldic description, using traditional terms to describe the design. The symbolism is a modern explanation of each color and symbol and how it connects to the unit’s history.

The 145th Armored Regiment’s path to approval began on Dec. 20, 1923, when then-Col. Ludwig S. Conelly, commanding officer of the 145th Infantry, sent a letter to the adjutant general of the Army requesting approval of one of several proposed designs. Across the next four-plus years, and following a series of correspondence between the Army, Militia Bureau, Adjutant General of Ohio and the unit, the 145th’s coat of arms received final approval on July 17, 1928. In September, the Army approved the design of the distinctive unit insignia, which uses the shield of the coat of arms, and is worn on the uniform of the members of the regiment.