Soldiers of Headquarters and Headquarters Company, 16th Engineer Brigade marched into Dublin Jerome High School’s football stadium June 25 for their call to duty ceremony, in preparation to deploy for approximately a year overseas in support of U.S. Central Command.

For the Soldiers, this deployment is the start of a new adventure and for some, it will be their first time overseas as full-time Soldiers. As engineers, their missions will vary depending on the needs of other units and local communities within their area of operations. The unit is a brigade headquarters company and will be providing supervisory oversight for subordinate engineer units in its area of operations.

Spc. Shayna Cook, the first female combat engineer in the Ohio Army National Guard, is among the group deploying. This is Cook’s first deployment overseas, and she is excited to put her extensive training to work. She said she will finally have the opportunity to show her whole unit what she is capable of as a combat engineer.

“I feel I need to set an example, because when training for 12B (the Army military occupational specialty code for combat engineer) females first began, it was a little difficult at first,” Cook said. “But once we showed them what females can do, I feel like we really put it down.”

That excitement carries throughout the unit, especially for Capt. Michael Cobb, who will be overseeing unit missions as project manager for the engineers. His wife Stephanie and 4-month-old daughter Logan attended the ceremony to support their Soldier — a spouse and father. Stephanie spoke about the difficulties and pride they have moving forward.

“As hard as it is, it is something I know he enjoys doing,” Stephanie said.

Over the next year, Cobb said he will miss his daughter’s first steps, first Christmas and first birthday. Despite the hardships, his dedication and support from his family is unwavering.

The call to duty ceremony is also a new experience for Sgt. Ansah Owusu, a wheeled-vehicle mechanic with the 16th Engineer Brigade. Owusu is originally from the African country of Ghana, and became a U.S. citizen through his military service.

“As I was going to college, I talked to a recruiter after seeing a friend in uniform,” Owusu said. “I needed to get the experience of it, to know what it is like to be in the Army of the United States, which is the greatest country in the world.”

The excitement of this deployment was evident on the faces of the Soldiers at the call to duty ceremony. From the first female combat engineer, to a new father, to a first-generation American Soldier, they all stood together to embark on their first deployment overseas representing the Ohio National Guard. 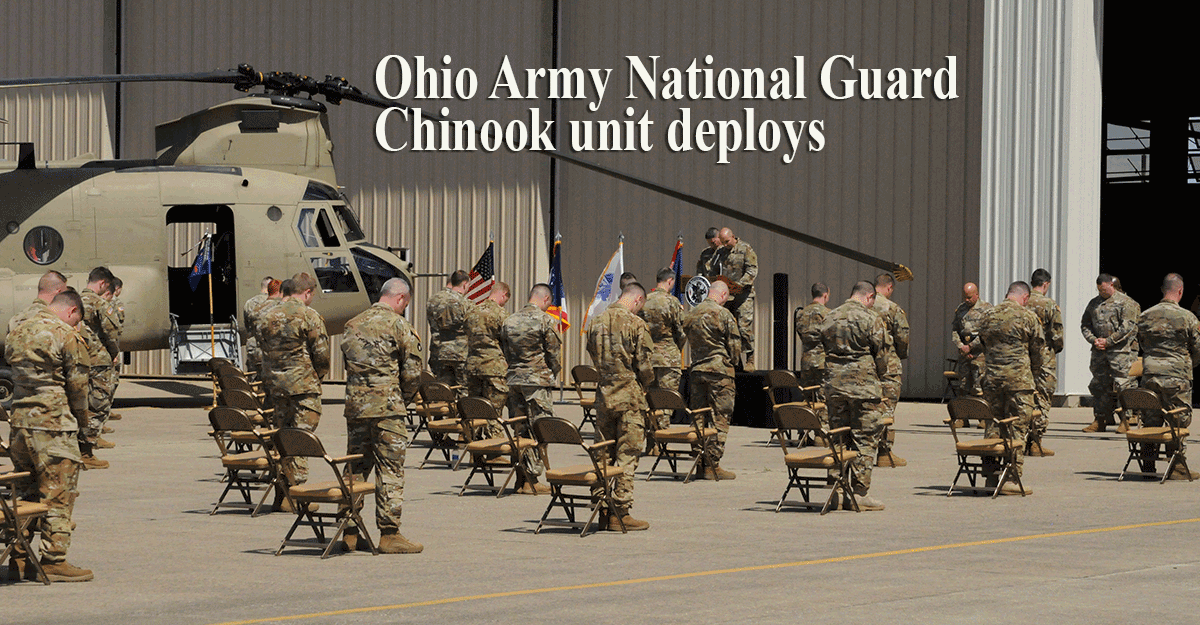 Chaplain (Capt.) Jason Nelson offers the benediction during the call to duty ceremony for Soldiers of the Company B, 3rd Battalion, 238th Aviation Regiment, during their call to duty ceremony June 16, 2020, at the Akron-Canton Airport in North Canton, Ohio. The unit, which operates the CH-47 Chinook cargo helicopter, is deploying in support of U.S. Central Command to provide aviation support and conduct partnership operations with countries in the region. 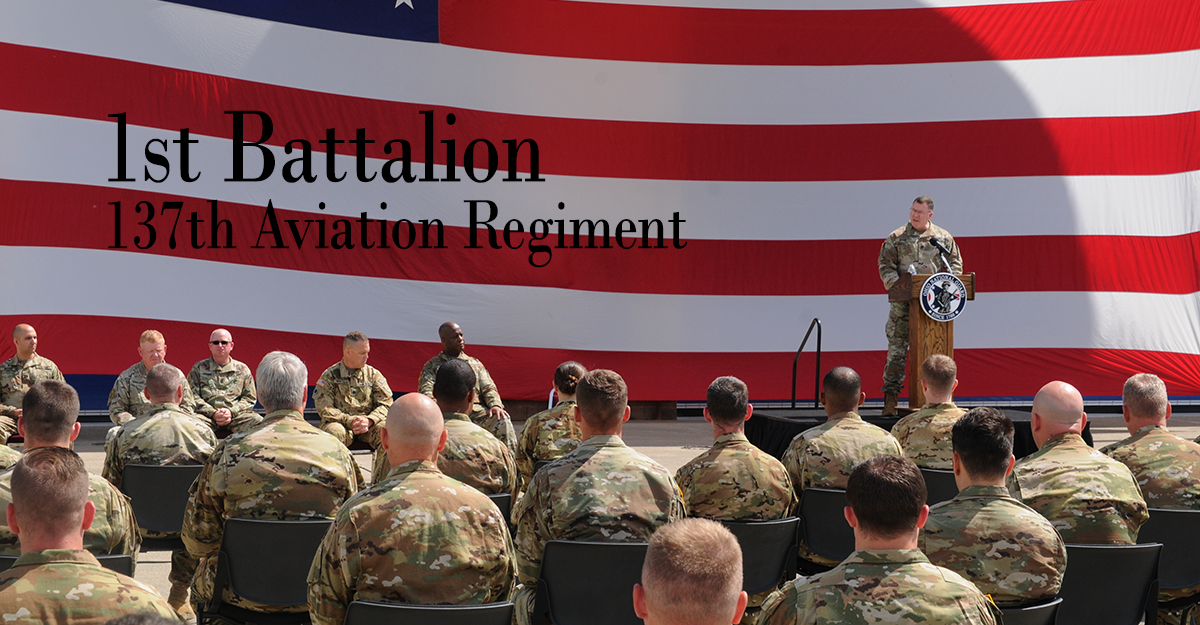 Col. Daniel J. Shank, Ohio assistant adjutant general for Army, addresses Soldiers of the 1st Battalion, 137th Aviation Regiment, during their call to duty ceremony June 17, 2020, at Rickenbacker Air National Guard Base in Columbus, Ohio. Shank wished the unit well during their pending deployment in support of U.S. Central Command to provide aviation support and conduct partnership operations with countries in the region. 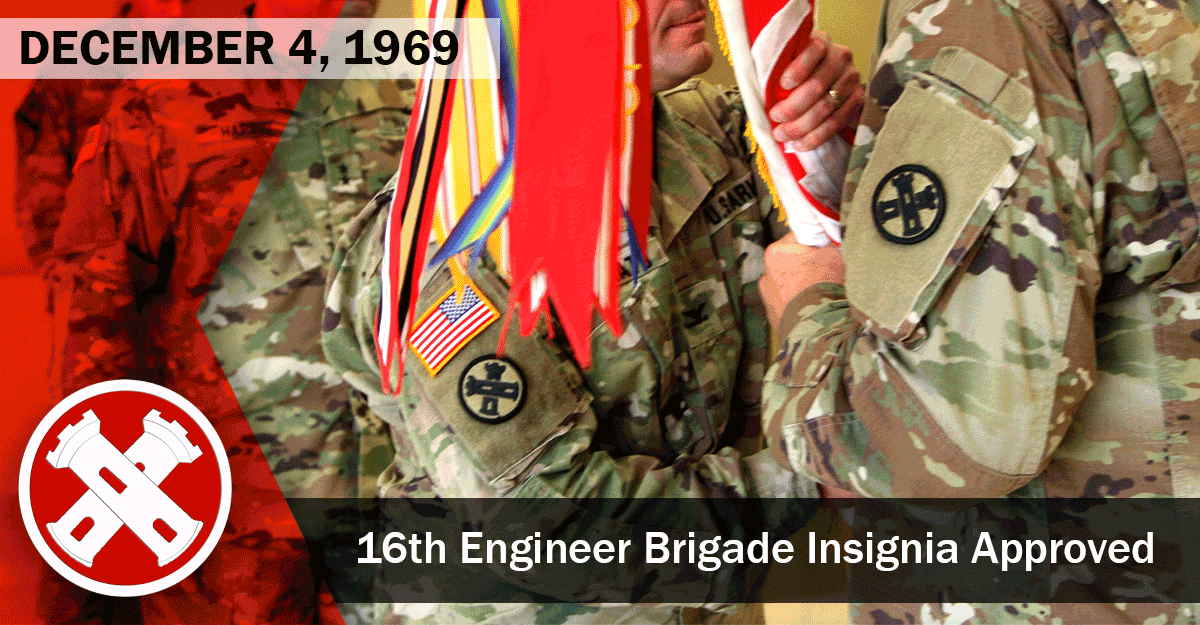 Formed on Feb. 15, 1968, by the reorganization of the 37th Division Artillery, the engineers first were authorized the formed insignia of the 37th Infantry Division. The new insignia is symbolic of their heritage with the scarlet disc with white border. The two crossed towers form a saltire — a symbol used during the Crusades to reward those who scaled town walls — and refer to the combat aspects of the Engineers. The saltire formed by the two crossed towers simulates an X, the map symbol used for brigades and also simulates the Roman numeral 10 (X), which with the three merlons of each tower alludes to 16, the numerical designation of the organization.